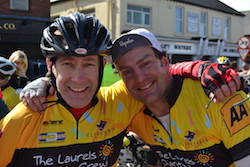 The Laurels Charity Cycle organised by the customers and staff of The Laurels bar in Clondalkin in Dublin in now in its seventh year. Since 2008 the cycle has raised over €480,000 and supported varied fundraising projects for the Crumlin Medical Research Foundation.

In 2012 they became a supporter of Straight Ahead. The close connection between the Laurels Charity Crew and Straight Ahead has grown over the years with Straight Ahead surgeons, nurses and board members all taking part in the cycle.

The 2015 cycle which leaves Galway on April 17th and arrives into Clondalkin on April 18th 2015, aims to raise €150K for Straight Ahead. This money will  go toward the purchase an EOS scanner for the Children of Ireland. 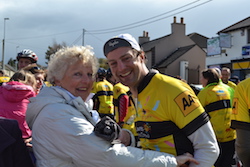 We are hugely grateful to the incredible bunch of people who organise an event which runs like clock work, provides, craic, exercise, exhilaration and hugely emotional moments, while raising money to help change children’s lives forever.

Join in the fun and sign up for the 2015 Galway to Dublin Laurels Chairty Cycle in aid of Straight Ahead by clicking here.