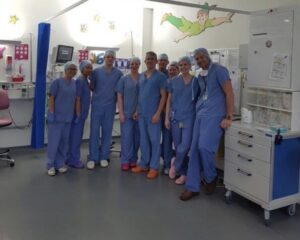 Its Always a Team Game

Did you know that 2% of the Irish population has scoliosis. The current waiting list for patients requiring spinal surgery in Ireland is over 150. Pat Kiely, co-founding Surgeon of Straight Ahead, is hopeful that new technologies and innovation in spinal surgery will improve the quality of life for some of Ireland’s worst cases of scoliosis. Straight Ahead is a partner of the Children’s Medical and Research Foundation (CMRF) Crumlin, and has completed over 125 life-changing operations on children in Ireland.

“Back in the recession era in 2007, when I started in Our Lady’s Children’s Hospital Crumlin, I inherited a two or three year waiting list for spinal operations – and that’s just for scoliosis, that’s not including any other orthopaedic surgeries.” Pat Kiely said. “Scoliosis is a sideways curvature of the spine but it’s very often associated with a twist in the spine. If your spine is twisting the rib cage is also moving, your shoulders and ribs all get distorted. If it gets very severe it has an impact on your internal organs. In its mildest form, it’s actually very common in Ireland – about 2% of the population have a curve in the spine but a more severe type of scoliosis is more like 1 in 1,000. They would be the ones that need treatment. The treatments range in a variation of options, like bracing and casts, or if it’s more severe, you’re looking at surgical options.

“That’s where Straight Ahead comes in. I remember having an end of term dinner with some junior doctors. Every week you’d see a kid that had such severe scoliosis in the clinic and you’d think immediately ‘Jesus, we have to get help for that kid fast!’ so you’d end up either cancelling somebody or another child would have to wait and there was no good solution to that type of problem. I was talking to a friend of mine from college, Shane Holland, from the business world, who had heard me talking about how frustrated myself and my colleagues were with this problem that we didn’t know how to fix. Shane said ‘OK, let’s put together a proposal’. He crystalized some of the discussions. In the depths of the recession we looked at a very under-funded area and wanted, by hook or by crook, to fix it.

“The whole world interacts differently with you when you’re standing straight. If you’re stooped when you’re standing or slumped in a chair, not only does the world see you differently, but you also see the world differently. In 2011, we started Straight Ahead and we did 5 – 10 surgeries after raising €150,000. We made a decision to make as much operations as possible in 2012, and we just kept going since then. It’s flabbergasting how much people are keen to get behind and support Straight Ahead. The surgeons do the operations for free to keep costs down as much as possible. We’ve operated on over 125 children so far and it’s amazing to be part of something so positive.

“It’s hugely rewarding. I’m so proud of all the work we’ve done with Straight Ahead and all the lives we’ve transformed. There’s nothing like it, it’s like your dreams coming true when you see a patient who had a severe curvature of the spine, sometimes 120 degrees, and then you see them walking tall a few years later, living life to the full. It really makes it all worth it.”

Pat said there are a few new innovations in spinal surgeries in Crumlin that are really cutting edge, like growing rods. For young children, their lungs are developing. If they have a progressing spinal problem at that early stage, it distorts their thorax development, lung development and other organs. Pat said it can be life restrictive. He explained that it can even lead to respiratory failure in adult years because if the chest doesn’t grow, the lungs aren’t big enough to support the body.

“Early onset scoliosis is probably one of the biggest challenges with scoliosis and so we’re starting a few innovations to try to help them – initially if the scoliosis is getting worse, you can try a cast or braces or something on the outside that will try to hold them steady on the inside.” Pat said. “We use growing rods in the spine, which are rods that can be surgically lengthened in time. In earlier days, we were using growing rods but the patients would have to come in every six months to have the rods lengthened in an operation (and complication rates were high). The rods didn’t grow passively with the spine, and different issues can arise.

Now, we have magnetic rods (and overall though there can be complications still, the need for frequent operations is much reduced). Crumlin has been at the forefront of this technology, as compared to our international counterparts we have a large number of children with Early Onset Scoliosis.

Pat ends by saying “We always have a great team around us, We couldn’t do what we do without them by my side, from the porters,the nursing staff,the cleaners,the other surgeons,the theatre staff,its always a team game.