What are spinal deformities?
When the body is viewed from behind, a normal spine appears straight. When the trunk is viewed from the side, the normal spine will demonstrate normal curves. The upper chest area has a normal roundback, or kyphosis, while in the lower spine there is a swayback, or lordosis. However, when a spine with a scoliosis is viewed from behind, a lateral, or side-to-side, curvature may be apparent. This gives the appearance of leaning to one side and should not be confused with poor posture. Increased roundback in the chest area is called hyperkyphosis, while increased swayback is termed hyperlordosis.
What is scoliosis?
Scoliosis is a common condition that affects many children and adolescents. Simply defined, scoliosis is a sideways curve of the spine that measures greater than 10 degrees on X-ray. Instead of a straight line down the middle of the back, a spine with scoliosis curves, sometimes looking like a letter “C” or “S.” Some of the bones in a scoliotic spine also may have rotated slightly, making the person’s waist or shoulders appear uneven.

Scoliosis is a condition of side-to-side spinal curves. On an x-ray, the spine of a person with scoliosis looks more like an “S” or a “C” than a straight line. These curves can make the person’s shoulders, hips or waist appear uneven. In scoliosis, the spine’s vertebrae may also be rotated, causing one shoulder blade or trunk muscles to be more prominent than the other.

Scoliosis does not result from carrying heavy items, sports, poor posture, or minor leg length abnormalities. In fact, in more than 80 percent of scoliosis cases, a specific cause is not known. Such cases are termed idiopathic (meaning of undetermined cause), and they are most commonly found in adolescent girls.

The term “idiopathic” means unknown cause. Although we do not know for sure what causes the majority of scoliosis cases , we do know it tends to run in families.

The term “congenital” means being born with the condition. Congenital scoliosis starts as the spine forms before birth. Part of one vertebra (or more) does not form completely, or the vertebrae do not separate properly. This type of scoliosis can be associated with other health issues, as well as heart and kidney problems.
Neuromuscular Scoliosis (NMS)
Any medical condition that affects the nerves and muscles can lead to scoliosis. This is most commonly due to muscle imbalance and/or weakness. Common neuromuscular conditions that can lead to scoliosis include cerebral palsy, muscular dystrophy, and spinal cord injury.
What causes scoliosis?
In more than 80 percent of the cases, a specific cause is not found and such cases are termed “idiopathic,” meaning “of undetermined cause.” Conditions known to cause spinal deformity are congenital spinal column abnormalities (abnormally formed vertebrae present at birth), neurological disorders, muscular diseases, genetic conditions (e.g., Marfan’s syndrome, Down syndrome) and a multitude of other causes such as infections or fractures involving the spine.
What does not cause scoliosis?
There are many common misconceptions and incorrect assumptions. To set the record straight, scoliosis does not come from carrying a heavy book bag or other heavy things, athletic involvement, poor sleeping or standing postures, lack of calcium, or minor leg length difference.
Who gets scoliosis?
In childhood, idiopathic scoliosis occurs in both girls and boys. However, as children enter adolescence, scoliosis in girls is five to eight times more likely to increase in size and require treatment. Progression is most common during the growing years. Severe curves may, however, progress during adulthood.
What causes abnormal kyphosis?
Excessive roundback deformity may simply be postural, and can often be corrected with exercises and proper posture. A small percentage of patients with kyphosis may have more rigid deformities associated with wedged vertebrae—called Scheuermann’s kyphosis—and its cause is unknown. The least common cause of excessive roundback is congenital kyphosis—resulting from one or more bones of the spine formed incorrectly—and requires evaluation by an orthopaedic surgeon. Excessive roundback may also be seen as a result of medical diseases such as ankylosing spondylitis or osteoporosis.
What is congenital kyphosis?
In the first six to eight weeks of embryonic life, a genetic change occurs that results in the failure of formation or failure of segmentation on the front part of one or more vertebral bodies and disc. This defect causes the spine to develop a sharp forward angulation as it grows. The forward bend of the spine is called kyphosis and is considered to be congenital as it occurred prior to birth. Congenital kyphosis does not appear to be inherited but rather something that happened for no known reason.
What are the two basic types of congenital kyphosis?
Failure of formation and failure of segmentation. The failure of formation (Type I deformity) of a portion of one or more vertebral bodies, most often occurring in the thoracolumbar spine, results in a kyphosis that usually worsens with growth. The deformity is usually visible at birth as a lump or bump on the infant’s spine. The failure of segmentation deformity (Type II deformity) occurs as two or more vertebrae fail to separate and to form normal discs and rectangular bones. This type of congenital kyphosis is often more likely to be diagnosed later, after the child is walking.
Can spinal deformities be prevented?
At present there is no known prevention for spinal deformities.
Are spinal deformities contagious?
No.
Please check out The Scoliosis Research Society  https://www.srs.org/ 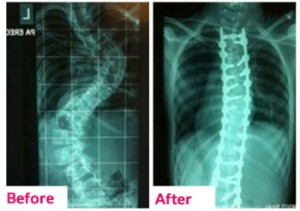