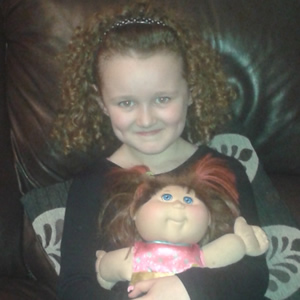 After few months I noticed Niamh’s left leg seemed different to the right. I had 4 other children and just felt that something was not right. My doctor referred Niamh for an X-ray and that’s when we got the news that she had  hip dysplasia, which mean her left leg was shorter.

We were devastated as no parent wants anything to be wrong with their child. We were sent to OLCHC to see Mr Pat Kiely where we were told we had a long road ahead of us.

Niamh got her first closed reduction procedure done in August 2009 and she was put in cast for 3 months with the cast being changed every 6 wks. When the cast was due too come off she was put in a hip brace for a further 6 wks.

Niamh’s progress was checked regularly in OLCHC. Mr Kiely is a fantastic surgeon and all the staff were wonderful. We could not have asked for better.

Niamh began walking and was doing really well. At times we would notice her limping, and it was then discovered that she needed a further operation, called a pelvic osteotomy to help deepen the hip socket.

Niamh was scheduled for surgery on different dates in 2011 but her operation kept was cancelled 5 times over a period of a year, which was very frustrating. This was put down to shortage of beds and cut backs.

In Feb 2012 we got a phone call to say Niamh had been chosen to be operated on through a charity called Straight Ahead. Once on this list we were told Niamh’s operation would not be cancelled again.

We were delighted and on Good Friday 2012, Niamh was operated on by Mr Kiely and his team. This was all thanks to the Straight Ahead, who do wonderful work. God knows how long Niamh would have been waiting if it was not for Straight Ahead.

Niamh spent almost a week in hospital and a further 8 weeks to get back to the walking after receiving physio. She is now in Junior Infants at school and running around with her friends. She is doing great and it’s all thanks Straight Ahead and Mr Kiely and his team.

We will always be grateful…..